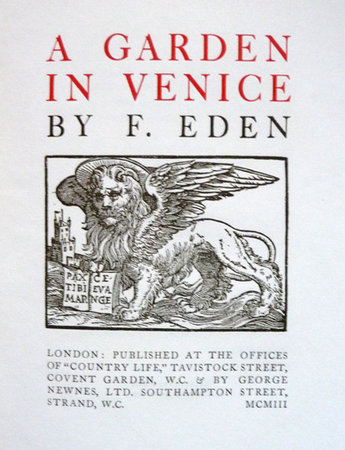 A GARDEN IN VENICE.

The original edition of a first hand account of the creation, at the hands of English expatriates, of what would become a legendary Venetian garden, giardino eden, on La Guidecca in the Venetian lagoon. Located behind the Redentore, this one-time vegetable patch was transformed by Frederic (great uncle of the Prime Minister, Sir Anthony Eden) and Carolyn Eden ( the sister of Gertrude Jekyll) into a little English pleasure ground of pollarded willows, roses, Madonna lilies, irises, etc. beginning in 1884. While importing their own native tastes, the Edens took care to respect the local character of their grounds, “ Building on formal lines made by the canals, an abandoned orchard had been crossed with straight walks covered by 600-700 yards of square-topped vine-clad pergola.” (Festing, S. GERTRUDE JEKYLL p. 154). Traditional structures and ornaments were used. Eden includes an interesting account of well-making on the island and in the garden. The prominence of the Edens in the expatriate community brought notable guests to the garden, as did the caché of later residents such as Princess Aspasia of Greece and her daughter and son-in-law, the King and Queen of Yugoslavia. Henry James, Anna de Noailles, Maurice Barres and Jean Cocteau are also associated with the spot. D’Annunzio set a scene there in his IL FUOCO. In LES DELICES DE L’ITALIE, Jean Louis Vaudoyer calls the garden “the most alluring place in the world to abandon oneself to melancholy.” (as quoted in Weal, M.T., POSTFACE; A GARDEN IN VENICE ). The garden was locked up after the death of its last occupant, but garden historian John Hall obtained entrance and wrote a description for HORTUS, Autumn 2003. “ the most alluring place...” Small 4to (23 x 18 cm); (vi) +135 + (1) pp. with decorative head and tail pieces, initial letters and text figures, from older engravings, including some from the Dream of Polyphilis, + frontispiece and 16 full page illustrations from photographs, with tissue guards, hors texte.

Other items of possible interest…