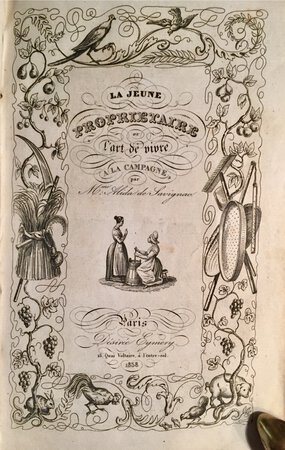 First edition. “8vo (17 x 10 cm); (vi) + 322 pp. with text illustration + engraved frontispiece + 2 engraved plates... Alida de Savignac’s LA JEUNE PROPRIÉTAIRE OU L’ART DE VIVRE (1837) is a novel-cum-handbook advising on the multiple aspects of running a country house...” (Finch, Alison. WOMEN’S WRITING IN NINETEENTH-CENTURY FRANCE, p. 79). This is the story of how the fictional Olympe de Saint-Julien, a young woman accustomed to delicate activities such as dance and music, but, also, a child of the revolution, regains her nearly ruined family estate through the efforts of a guardian relative, and then learns how to run the rural property on her own. She agrees to study the popular manual LA MAISON RUSTIQUE and then proceeds to tackle the reclamation of the house, garden, and farm, transforming decaying structures into stables, granges, poultry houses, etc. Her new plans and those advised by her guardian include making water courses to help in the creation of a fish pond, the planting of fruit and ornamental trees, and designing appropriate arrangements of the house and its rooms (the kitchen being most important). Providing supplies of medicines for the care of her workers was essential. Olympe’s guardian also offers instruction on the milk house, the poultry yard, the pigeon house, and the sheep hold. All of this is discussed in great detail and with an eye to profitabllity. There must be a vegetable greenhouse, a fruitier, and a grand shed for gardening and agricultural tools, as well as carpentry shop equipment. Eventually, Olympe rises at six each morning to survey the operations of the farm. She teaches local children and dispenses medicine. Nor is the ornamental garden neglected, with green lawns and roses planted in front of the chateau. Politics and romance play their part in the story and two tales, LES JUMELLES and LA FÊTE de SAINTE-CATHERINE, are added as lessons. Written by a woman and published by another - Désirée Eymery - who published the series Bibliothèque de l’éducation - this is a strong example of literature produced in early 19th century France encouraging women to seek empowerment. In the U.S. we locate only one copy of a later 1853 edition, and five other various editions located in France. “Olympe fermière, dame de château, maîtresse d’école et médecin” 8vo (17x10cm); (vi) + 322 pp.k with text illustration + engraved frontispiece + 2 engraved plates.

Other items of possible interest…